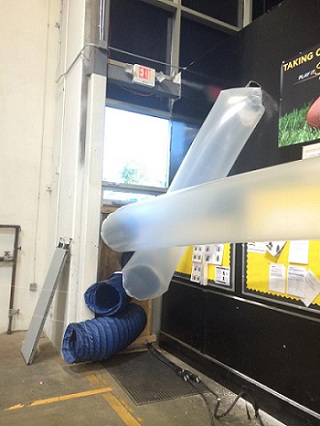 Relative humidity: it’s among the environmental conditions typically specified for cleanroom operations. The relative humidity inside a semiconductor cleanroom typically is controlled to a target value within the 30 – 50% range, and tolerances as narrow as ± 1% for a few areas, like photolithography—or even less for DUV processing—and relaxing to ± 5% in other areas.

Keeping make-up air inside those specifications all throughout the year will entail operating expenses and capital. However, why will relative humidity control inside a cleanroom warrant these types of expenses?

High humidity minimizes the build-up of static electrical charge upon a cleanroom surface—a desirable effect. It is low humidity which favors charge buildup and possibly damaging electrostatic discharges. Static charge starts dissipating quickly when the relative humidity goes beyond 50% yet persists for lengthy times on unground or nonconductive surfaces while below 30%.

As a relative humidity of 35 – 40% might be an acceptable compromise, typically, semiconductor cleanrooms incorporate extra control features for restricting buildup of static electrical charge.

The rate of most chemical reactions, which includes corrosion processes, rises with increasing relative humidity. Every surface exposed to ambient cleanroom air is quickly covered with at least one layer of water. As those surfaces are thin metal films of a composition reacting with water, high humidity will feed this reaction. Thankfully, some metals, like aluminum, will form a protective oxide with water which blocks more oxidizing reaction; copper oxides, on the flip side, aren’t protective; therefore, copper surfaces are prone to high humidity.

The most pressing necessity for humidity control inside a semiconductor cleanroom derives from photoresist sensitivities. It is photoresist which demands the tightest control limitations due to its properties being so relative humidity sensitive.

Both temperature and relative humidity are crucial for precise dimensional control and resist stability. Photoresist viscosity, even at constant temperature, rapidly decreases with a rise in relative humidity. Of course, changing viscosity changes the thickness of the resist film that is spun-on by a fixed coating recipe.

Relative humidity control inside a semiconductor cleanroom isn’t optional. However, sometimes, it is great to assess the bases and reasons for universally accepted, common practices.

This site uses Akismet to reduce spam. Learn how your comment data is processed.